Iceland is a land of fire and ice. Nowhere else can you find a more diversified, contrasted and extraordinary nature. Even with a location barely below the Artic Circle, the winters on the island can be warmer than in New York or Vienna. The landscape is rough but at the same time romantic: steep cliffs plunging precipitously into narrow fjords, deep canyons, extensive glaciers, black sand-beaches, grumbled volcanoes and boiling geysers represent the island.

The capital Reykjavik is one of the cleanest places you will ever visit. But ironically, translated it means “Smoky Bay”. Because smoke, or rather steam, was the first thing the city founder Ingolfur Arnarson saw rising from the thermal hot springs in the 9th century. Today, this steam is used for heating up the whole city of Reykjavik. But besides clean and fresh air, Reykjavik also offers neat restaurants where you can find the freshest of fish. If there is no show running at the national theatre, you will find the inhabitants of Reykjavik sitting at home on the couch with a good book. The Icelanders are famous for publishing books; they publish more books per capita than any other nation in the world. They love to write, read and tell stories, especially about their famous trolls and sagas.

After days of “city life”, you may want to see something else. But you do not have to go far because Iceland is the less densely populated country Europe (only 334.000 inhabitants). Most of the townspeople owe a country house, which they use in their free time for fishing or observing birds. But whoever is interested in “real” wilderness needs to visit the Westman Islands in the South. The youngest island is Surtsey. All of the sudden, it appeared after a volcanic eruption in 1963 and is still inhabited. It is a paradise for birds, plants and wild flowers.

In the past thousand years, the people have been influenced by many terrible forces of nature and by history. Black Death, hunger and natural catastrophes have formed the character of the Northerner and Celts, which settled down in Iceland first. These influences developed a tough and vigorous folk, in which Nordic fatalism and self-confidence is combined with sensitivity and curiosity of the Celts.

Take a look at these incredible bucket list destinations in Iceland.

Bubbling and steaming between the rocky promontories of the Reykjanes Peninsula some 40 kilometers from the island’s capital at Reykjavik, the Blue Lagoon hails in as one of Iceland’s most visited tourist attractions. Despite its volcanic nature, the site is actually very young; formed from the leftover plugholes of a geothermal power plant in the 1970s. Still, the location amidst the ridges around Grindavik is truly enchanting, while the waters come packed with minerals – the reason for the shimmering, whitish hue of the lagoon and the driving force behind the spot’s famed healing powers. Visitors to the lagoon can also enjoy in-water massages, guided tours of the curious geothermal area and luxury lounge facilities besides. 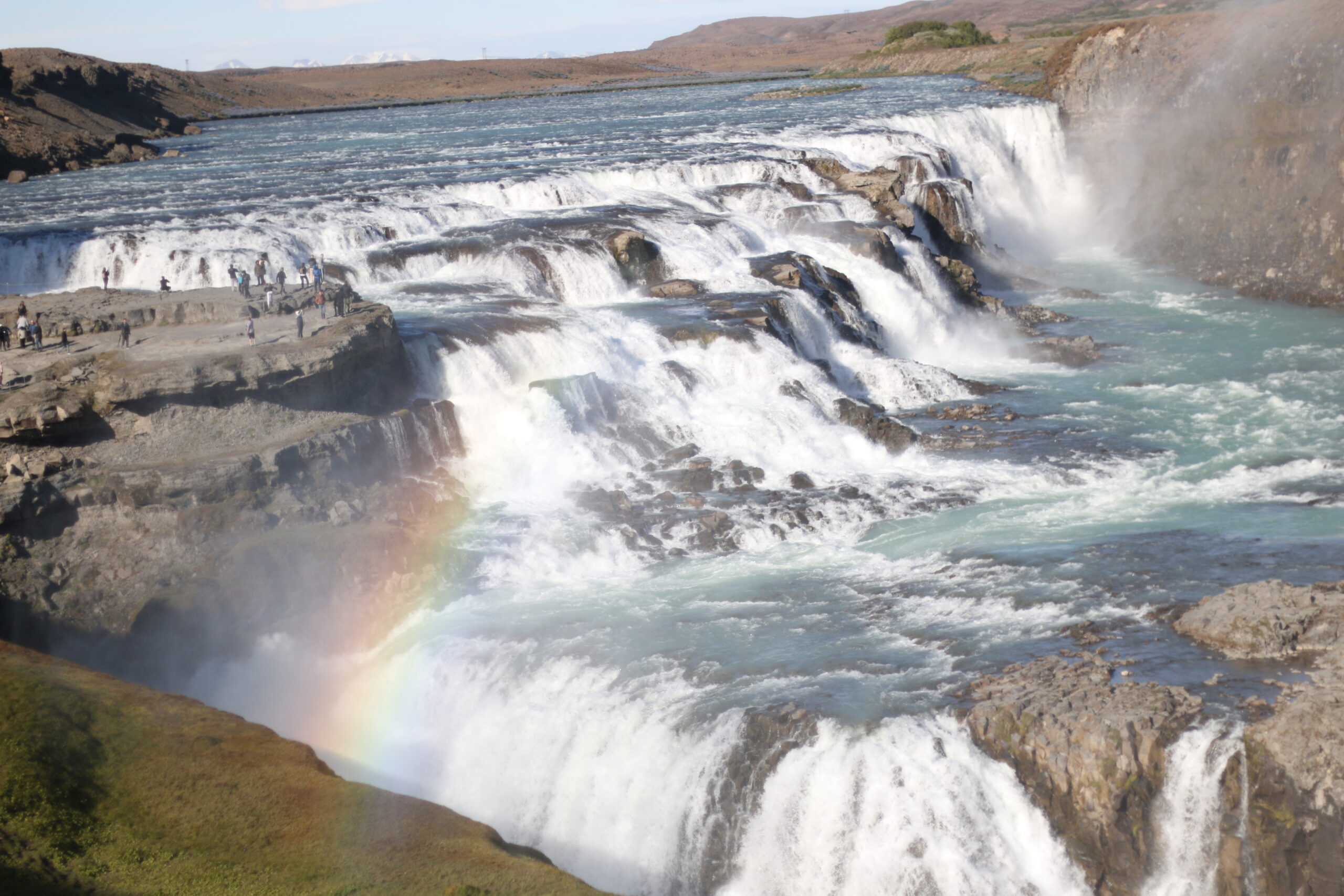 Visitors will find the majestic Gullfoss Waterfall roaring over the escarpments and bluffs of south-western Iceland. It’s famed as one of the most dramatic cataracts in the world, and cascades over a series of stepped rocks and terraces before plunging over the 32-meter high crevice that gives the fall its distinct appearance of disappearing into the Icelandic subterrane. The falls themselves can often be found arched over by rainbows or shrouded in plumes of mist, while by summer, the surrounding hills and ridges come dressed in a verdant covering of grass that makes a fine backdrop for hiking around the banks of the Hvita River.

Caked in ice all year round, the soaring ridges of the mighty Katla caldera play host to Iceland’s wild and arctic Myrdalsjokull Glacier Park. This snow-packed field encompasses hundreds of square kilometers and represents the fourth-largest of its kind in the country. It’s known for its otherworldly appearance, as verdant peaks poke their way out above the ice-carved valleys, metamorphic creations crowd above the crevasses and quick sand pools lurk on the edges of Solheimajokul – one of the most striking offshoots of the Myrdalsjokull Glacier. Guided hiking is uber-popular here, with spots like the Fimmvorduhals pass and the ridges of Eyjafjallajokull both offering daring getaways.

A deep-cut valley set in the very midst of south-western Iceland’s famous Fjallabak Nature Reserve, the Landmannalaugar is a hidden gem of a destination that comes complete with everything from bubbling volcanic hot springs to ochre-coloured mountain ridges. Hiking trails surround the entire region, while a campsite right in the middle of the Landmannalaugar and a separate mountain hut offer outdoorsy types the base point they need for hitting the famous Laugavegur trail. The piece de resistance of the area has to be the Brennisteinsalda peak though; a medley of obsidian lava sheets and iron-coloured, sulphur-spotted ridges which is viewable from the trail.

At once sophisticated and quirky, hedonistic and happening, Reykjavik packs one hefty punch for the northernmost capital city on the planet. Its charming downtown of painted timber homes is watched over by the soaring and unforgettable needle-like spire of the Hallgrimskirkja – now a veritable icon of the Icelandic city – while oodles of hearty Scandinavian vodka bars and taverns coalesce between the streets. Nearby, the beautiful Tjornin pool adds an aquatic edge to the town, while the Alpingi parliament building oozes 19th-century charm and the centre pulses with the likes of the National Gallery of Iceland, the Hafnarhus and the fascinating ancient ruins of the 871±2. In short, this one’s not to be missed!

Crowned by the seemingly endless ice fields of its eponymous glacier (the largest on the continent outside of the Arctic Circle), the Vatnajokull National Park makes its home over more than 13,000 square kilometers of south-east and central Iceland. The area is famed for the great variation in landscapes, rolling from the flower-packed meadows and roaring waterfalls (don’t miss the famous Dettifoss Fall!) that run through the Skaftafell lowlands (where there are also camping sites aplenty by summer) to the windswept, crevasse-cut glacial fields on the mountaintops. The wetlands here play host to roaming reindeer, while mighty Hvannadalshnukur (the country’s highest point) stands high and the rugged interior of the Eldgja canyon showcases some truly wondrous volcanic geology – there’s loads to see!

Borgarnes may just look like a small dash of whitewashed timber in its position sandwiched between the coastal plains, the rising peaks of the Hafnarfjall massif and the waters of the Borgarfjordur a little north out of Reykjavik. But this humble fishing town on the edge of the sea actually has mythic roots, in the pages of the Egils Saga, and later the spot became the commercial trading centre for all of west Iceland. That means travelers can expect an array of shopping opportunities and the likes of the Settlement Centre Museum, which chronicles the earliest days of Borgarnes, all alongside the more obvious draws of the surroundings: coastal hiking; whale spotting; those indelible hot springs!

Carving its way out of the rocky inland of north-east Iceland, the chiselled gorges and ridges of Asbyrgi rarely fail to draw a gasp. In all, the sheer-sided edges of the canyon run for more than three kilometers and come in at a whopping 100 meters in height at some points. Hiking trails can be found piercing deep into the river-carved, glacial valley, weaving past tussock meadows, willow and birch groves and the ancient features of Ice Age cliffs. The spot is also shrouded in Norse legend; thought to have been created by the footfall of Odin’s mythic horse, Sleipnir.

A symphony of volcanic ridges and continental cracks, carved canyons and the flowing cataracts of the mighty Oxara River, the Thingvellir National Park is arguably the most beautiful natural enclave in all of Iceland. Not only is it easily accessible from Reykjavik, but also comes complete with totemic sites like the Silfra fissure and the Peningagja pool, a rift lake that glimmers with coins dating back more than 100 years. Thingvellir is also a hiker’s dream-come-true, boasting rugged cliff walks and mountain climbs, while history and culture buffs will love uncovering the remains of the country’s first Viking age parliament – established here in 930.

Boasting a truly dramatic location on the small islets and finger-like peninsulas that linger in the Atlantic waters off the Hornafjordur, little Hofn is a prime example of a southern Icelandic fishing town. As one of the favoured gateways to the wilds of East Iceland and the Vatnajokull National Park, the spot is a great choice for travelers eager to delve into some of the country’s top bucket-list natural sights, while a folk museum, the Ice Land Glacier Exhibition and arguably the best lobster eateries in all of Europe make lingering here for a day or two a fantastic way to get a feel for the rustic, salt-washed vibe of the seafaring locals.